Details of Vernier caliper assembly and parts are discussed below. Manufacturing material, assembly of measuring jaws, location of grooves, right angle assembly, knock-pins links jaws to main assembly, stoppers to fix the jaws, sliding guide bushings fitted to the two legs all are addressed in details.

There are a number of alloys which can be used to manufacture vernier calipers but the material most widely used for the manufacturing of vernier calipers is 440C grade Stainless steel. It is suitable because of its superior wear resistance, hardness and a high ultimate tensile strength which makes it able to withstand high stresses. In addition its ability to resist corrosion makes it a popular choice.The stainless steel is further strengthened by heat treatment which improves its ability to resist permanent dents and lessens the impact of wear compared to other stainless steel alloys. The treatment even improves the Ultimate tensile strength of the material.

The Assembly of Measuring Jaws:

The measuring jaws of a vernier caliper require very precise manufacturing to make accurate readings possible. As a cost reduction measure, the jaws and the other parts like the main scale and vernier assembly are manufactured separately. This allows manufacturers to use higher quality materials like anti wear stainless steel to make the jaws while cheaper materials like aluminium can be used to manufacture the other parts. This approach not only saves material but allows the process of manufacturing the main beam and vernier assemblies to be standardized which is more efficient. Subsequently the material of the jaws can be changed according to specifications without having to change the other components.

The main beam and vernier assembly contain grooves to allow the vernier scale to slide on top of the main scale. Additionally the measuring jaw’s base is also held by the grooves which is important as it prevents the jaws to get misaligned or disconnected from the main body if a force is applied in a direction other than in which the vernier scale can move. 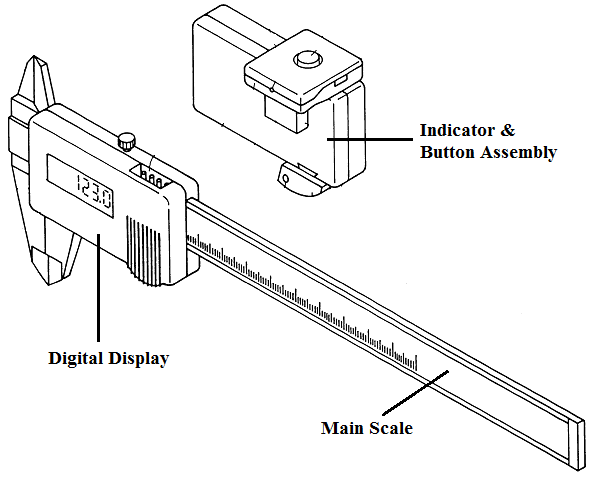 Knock pins are used to fix the measuring jaws and the assemblies together. These pins are responsible for preventing the jaws from getting detached from their assemblies when a force is applied on the vernier scale to move it along the main body while taking a measurement.

The application of knock pins takes place after the assemblies have been fixed and joined and the jaws have been attached to the main assembly with their surfaces perpendicular to the legs of the main body. This approach enables manufacturers to assemble the jaws and the assemblies exactly with respect to each other.

Stoppers to Fix the Jaws:

The two jaws are separately joined to the first stopper and the vernier assembly. The two legs of the main beam assembly are joined together by using stoppers at both ends. This also enables us to control the angle between the measuring surface of the jaw attached to the main body and the two legs of the main body. This can be done from two points i.e the point where the first stopper and the leg are joined and the point where main body and the measuring jaw are attached.

A jig is used to hold the two legs parallel to each other. The guide bushings are attached to the vernier assembly and provide sliding support to the assembly while the ends of the legs are attached to stoppers at both ends. Due to the vernier assembly and measuring jaws being separately attached, it is possible to control the angle between the surface of the main beam measuring jaw and the main beam assembly.